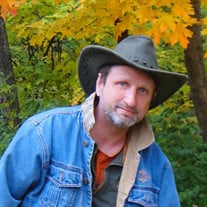 Gerald Allan Kopp Obituary With deepest sorrow, we announce that Gerald Allen Kopp, also known as Jerry and Justin, our most beloved son, brother, uncle and friend passed, suddenly, on Tuesday, February 23, 2021 at the age of 51. Those who knew Jerry even just a little, lost a shining light in their lives. Jerry was always the first to offer kindness, friendship and a seat at his table. Jerry and his partner, Frank, always showed their loving ways to put their beloved dogs, Brock, Cyrus, Jesse and Kody ahead of themselves. Jerry had many friends in and out of his life. As time went on, he stayed closer to few friends who continued to be very important to him. A lover of music and played guitar nicely. Jerry loved the outdoors's, barbecuing, nature and making his own crafts as gifts for friends. Jerry loved his home and life as a homebody. He enjoyed his various building projects and helping others with theirs. Jerry enjoyed being outside with his gardening, planting, and growing his many arborvitaes trees. And recently, planting his 4 larger forest pansy (purple leafed) red bud trees which added so much color and foliage in the summer. He was very proud of his Hawaiian Kona blackberries that he grew for home made jellies and jams. And the roses that he grew about his yard. He just loved being outdoors, loving those blue summer skies and those welcoming winter snows. As far as cooking, he absolutely loved it. With making so many of those meals from scratch. Jerry would spend hours prior to a meal to take the amount of time to have it all perfectly done in the best way possible. Jerry was an home 'expert' in inventing his own culinary ways. He loved making Mexican meals all made from the bare basics. Making the sauces and salsas out of varied chilis and tomatillos with even making his own corn and flour tortilla's. Making corn tamales stuffed with seasoned meats. Jerry was not much of a drinker, however, he did enjoy a few glasses of wine while he prepared his extravagant meals. He also preferred sweet liquors; peach, blackberry, and so on. And yes, Jerry really enjoyed making his margarita's for those special, fun days celebrating with friends and family. His grilling perfectionism shown through when it came to barbecuing meats... every grilling to be a sure delight for family, friends and guest. He just loved those ways to bring people together. Creating those special moments in such nice times and then the memories to follow. He will be missed greatly by his, life partner / significant other of 16 years, Frank Calph. As well as his remaining parents, Ronald and Sandra Kopp; siblings, Michael Kopp, Karen Kopp Heckenkamp ( Darren Ginn), Daniel Kopp and Rebecca Kopp Kelley ( Jason ). His Grandmother, Betty King. His nieces and nephews; David, Melissa, Christopher, Nicole, Courtney, Craig, Amanda, Kayla, Jacob, Haley, and Steven. His loving aunts, uncles, cousins, great nieces and nephews and many great friends . He has now joined his grandparents, Lester and Amelia Kopp, Grandfather William King and his dear friend, Steve Dooley. As all also were dearly loved and missed here on earth, as now they are together in heaven. In lieu of flowers, donations may be made to The St. Louis Humane Society of Missouri in remembrance of Jerry Kopp's love for animals. '

Gerald Allan Kopp Obituary With deepest sorrow, we announce that Gerald Allen Kopp, also known as Jerry and Justin, our most beloved son, brother, uncle and friend passed, suddenly, on Tuesday, February 23, 2021 at the age of 51. Those... View Obituary & Service Information

The family of Gerald Allen KOPP created this Life Tributes page to make it easy to share your memories.

With deepest sorrow, we announce...