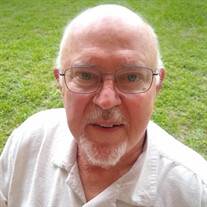 Eugene Joseph Buescher, 86, who resided in Lake St Louis for almost 50 years, peacefully passed away in his home on Saturday, November 6, 2021. He was surrounded by his family and caregivers. He was a wonderful, faithful, hard-working, charitable man, who loved the Lord. He was devoted to his wife Eunice (8/8/2021) of 64 years, his 7 children, 19 grandchildren and 10 great grandchildren loving them all so dearly. Gene was born, March 3, 1935 in St Louis MO. The second oldest of 5 children in a working class home. He was very athletic and loved to swim and dive competitively. He was very driven and had a strong work ethic. He attended the seminary for a short time, but knew he wanted to go to college and had to pay his own way. He worked as a golf caddy, lifeguard and taught swim lessons at Westwood Country Club. He met his true love, Eunice, his second year at Harris Stowe Teacher's College, where he earned a Bachelor’s Degree in Education. He loved the summers and loved spoiling his parents and Eunice with dinners at the country club. While working hard as a swim instructor, he mentored and trained a troubled youth on how to dive. They both competed and earned 1st and 3rd place at a dive competition in Chicago. This helped him earn a stipend to further his education allowing him to get his Masters in Physical Education Health & Recreation from Washington University. In the summer of 1957 he and Eunice were married. He also served in the Coast Guard until May of 1964. After a few years of teaching Physical Education he went into sales at Moore Business Forms where he worked for over 25 years. He and Eunice wanted a big family and always trusted that God would provide for them. He felt so blessed as it always seemed he received a raise or bonus after the birth of each child. “The Lord will provide”. Gene was an entrepreneur and inventor. His creative mind was always at work thinking of clever solutions to some of life’s simplest problems. In the early mornings, while his family slept, he worked for years on designing a snap apart, re-purposed mailer envelope. Gene invented and took a patent out on a Re-Usable Envelope which is still being used today. He was then able to start his own company, Ingenious Forms. He worked for almost 15 years before he sold his company and retired. He loved traveling the world with his wife, and enjoyed the big family vacations with his children and grandchildren. Over the years he was very involved with his kids activities; boyscouts, coaching, swim lessons. He and Eunice enjoyed leading the Teens Encounter Christ (TEC) church retreats. He was involved in the St. Vincent de Paul Society and fostered 3 Vietnamese refugees in his bustling home in the 70’s. He had the gift of hospitality and welcomed anyone into his home. He had a passion for helping others and was very generous. He was always planning and organizing many activities with family and friends. He was very involved with St Patrick’s Church, the Volleyball Group, the LSL community, Anglers Fishing Club, Pontooners Club, and Cookout. He enjoyed playing cards and dominoes with family and friends. He was a Senior Olympic medalist up until the age of 80 with countless medals in competitive swimming, shuffleboard, badminton and bocce ball. Gene lived life to the fullest. He never held grudges or spoke poorly about anyone. He always found the good in others and had a passion for helping those less fortunate. He would literally give the shirt off his back to help someone in need. He was never afraid to share his wisdom and faith. He was a true example of a good and faithful servant, constantly sharing the message “Jesus I Trust in You”. He is survived by his Son, Dan Buescher (Joyce Thompson) his children Kelsey and Ryan and their mother Bridget; Son, Tim Buescher (Jackie) Carly and Lucas; Daughter, Linda Williams (John) Amy (Josh (Tanner & Lexi)), Catrina, Brooke, Holly (Daniel, Aminah, Giovanni, Avianna), Brittney (Kevin (Kayden))& Amanda (Brian (Brycen & Maleyna)); Daughter, Donna Redd (Robert) “Amber”, Austin, Madison & Gabriella; Daughter, Mary Sengl (Craig) Max & Megan; Daughter, Chrissy Kasprzyk (Dave) Joseph, Shaun & Clare; and Son Greg Buescher. Sister-in-Law Sue Buescher and Brother-in-law Robert Gamache and many nieces and nephews. Preceded in his death by his wife Eunice Buescher (8/8/2021), Art & Rose Buescher (parents), Joan & Jim Crawford, Sue Gamache, Joseph Buescher & Russell Buescher (Sisters & Brother-in-laws), John & Philomena Barringhaus (Father/Mother-in-law), Carol Barringhaus (Sister-in-law), Donnie Magruder (Son-in-law), Amber Redd (granddaughter). We are forever grateful to his caregivers over the years…Christine, Maggie, Marla, Amy, Shirley & Margret. Such an amazing group of women who brought a smile to his face and kept him going. As well as St. Luke’s Hospice that allowed him to stay in his own home to be cared for this past year. Thankful & Blessed….He will be missed. In lieu of flowers, donations may be made in his name to The Society of Saint Vincent de Paul of St. Patrick’s Church, 405 S Church St, Wentzville MO 63385. Funeral service is Saturday, December 4, 2021 10:00am @ St Patrick’s Church 405 S Church St, Wentzville MO 63385. Visitation 9:15am, Mass 10:00am followed by a luncheon in the parish hall.

Eugene Joseph Buescher, 86, who resided in Lake St Louis for almost 50 years, peacefully passed away in his home on Saturday, November 6, 2021. He was surrounded by his family and caregivers. He was a wonderful, faithful, hard-working, charitable... View Obituary & Service Information

The family of Eugene Joseph BUESCHER created this Life Tributes page to make it easy to share your memories.

Eugene Joseph Buescher, 86, who resided in Lake St Louis for...