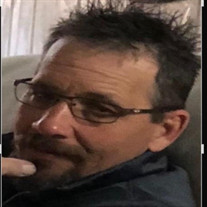 Eric Michael Smith, 52, passed away April 2nd, 2020 at Evelyn’s House Hospice Center in Creve Coeur, Mo. after a long battle with cancer. Eric was born on November 3rd, 1967 in St. Charles Mo. to Erna Schulz and George Smith. Eric attended St. Charles High School in St. Charles, Mo. graduating in 1986. Eric began his career and was initiated into the Iron Workers Local #396 on 11/01/1989 as an apprentice. He went from apprentice to journeyman on 07/01/1992. He then went on to become a full-time member on 09/01/2018. He spent 31 years as an ironworker with 14 years as a general foreman for Weaver Steel. Eric lived in Troy, Mo. With his partner Tammy Chapman. Eric loved all sports, but especially Football and hockey. He loved watching Mizzou play and the Blues hockey team. He was ecstatic when the Blues won the Stanley Cup. Eric also enjoyed the outdoors camping and boating and his two little canine friends Jaxon and Jilli. He also loved his weekends as a crew member for the Wagner Motorcycle Drag Racing Team. He was very proud to be a part of that team. Eric’s life was short, but he was loved by many family and friends and he loved them fiercely. His smile and laughter was infectious and he lit up a room when he came in. Eric would do anything for anyone and had a very sweet soul. Throughout his battle with cancer he remained strong till the end. Eric is survived by his parents Erna Schulz of St, Charles, MO. and George Smith of St. Louis Mo., sister Mardene Smith Rowland of Fenton, MO.; brother Jeff Smith of St. Charles, MO.; sister Nicole Smith Wlodarczyk of Little Elm, Texas; sister Adrienne Smith Jacobsmeyer of St. Charles, MO.; his son Eric Smith JR of Jonesburg, MO.; daughter Taylor Smith Jarvis of Warrenton, MO.; daughter Allison Smith of Jonesburg, MO,; daughter Jordan Smith of Troy, MO.; partner, Tammy Chapman of Troy, MO. and ten grandchildren. Eric was preceded in death by his Grandmother, Rachel J. Smith and grandson Avery Cole Jarvis. A Celebration of Life will be held in Eric’s honor once we are able to do so. Arrangements will be announced at a later date when they become available.

The family of Eric Michael SMITH created this Life Tributes page to make it easy to share your memories.