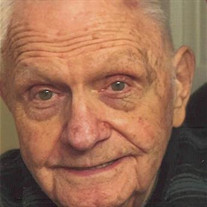 On Wednesday, January 1, 2020, Elbert “Gene” Bain, loving husband and father of three children, passed away peacefully at the age of 91. Gene was born April 24, 1928 in Rector, Arkansas to Oather Bain and Aline Briscoe (nee Meharg). On November 19, 1949, Gene married Evelyn Falter. They raised a daughter, Jeanette, and two sons, Jimmy and John. Gene had a passion for football and baseball and loved the St. Louis Cardinals. He greatly enjoyed fishing and hunting, but his most treasured enjoyments were playing cards and spending time with his family. He was also very fond of the dogs he had throughout his life. He retired from McDonnell Douglas in the early 1980’s and often joked that he had lived a great life having been retired for more years than he had worked. Gene was preceded in death by his father, Oather Bain, his mother, Aline Briscoe, his sister, Helen Frye, his brother, Bill Bain, and his son, Jimmy. He is survived by his wife of seventy years, Evelyn, his daughter, Jeanette (Ernie Wuebbeling), and son, John (Cindy Bain), seven grandchildren, sixteen great-grandchildren, and four great, great-grandchildren. He was also blessed with a large family base of nieces, nephews, in-laws, and friends. He will be missed by ALL! A viewing/visitation will be held Friday, January 3, 2020 at Alternative Funeral & Cremation Services, 2115 Parkway Drive, St. Peters, MO 63376 from 6-8:00PM. In lieu of flowers, those wishing to honor Gene’s memory may memorial donations to the Cerebral Palsy Foundation by visiting https://www.yourcpf.org/donate-2/

The family of Elbert "Gene" Eugene BAIN created this Life Tributes page to make it easy to share your memories.