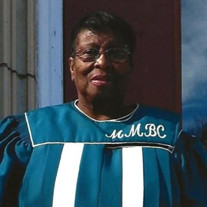 Celebrating the life of Dorothy Jean Turner, 82, of St. Peters, Missouri, who died on Saturday, October 30, 2021. Dorothy was born on March 27, 1939, in Pemiscot, Missouri to the late Dan Withers and Lindia Clark. Dorothy was preceded in death by both her parents, three brothers, Walter Louis, William Chandler and Ralph Chandler, a son-in-law, Yuris Jackson, a grandson, Sean Butter, and a great grandson, Ka’Mir Garrett. Dorothy graduated from Vashon High School. She married her one true love Edward Turner Jr. on February 6, 1959. To this union they had six children: Renae, Cleveland, Dawana, Kris, Vicky, and Darryl. Dorothy accepted Christ and became a member of Memorial Baptist Church where she taught youth Bible study and sung in the choir. She had a beautiful voice which was one of her many talents. Dorothy went on to work at Barnes Hospital in Surgical Pathology. She was also a member of the BJC Diversity Choir. She worked at Barnes Hospital for 20 plus years, retiring in 1999. Dorothy truly had a heart of gold and there was nothing she wouldn’t do for her family or friends. She loved everyone. Dorothy was always referred to as “Mom” or “Granny” by everyone that knew her. To know her was to love her. Dorothy transitioned Saturday, October 30, 2021, in the comfort of her home surrounded by family. Dorothy’s memories will live on through her family. Dorothy leaves to cherish her, a sister, Loretta Boykins, a brother, Norman Chandler, two sister-in-law’s, Sonja Withers and Beverly Chandler, her children, Renae Turner, Cleveland Turner, Dawana (E. Glen) Tucker, Kris Turner, Vicky Jackson, and Darryl (Curtrena) Turner. Her grandchildren, Missy, Lil Cleve, Qui’Anna, Ashley, Derrick, Shannon, Der’Neika, Nia, Christopher, Crista, VerShawn, Darian, LeTanya. Her great grandchildren, BJ Larel, Nicole, Malik, Malaysia, Lyric, CJ, Cameron, KJ, DJ, Iayanna, Ja’Nya, J’Dence, J’Ayanna, Loghan, Brendan, Tristian, Irys, Seanecia, Emmanuel, Nevaeh, Savana, Saphira, and Levi. There will be a Memorial Service at Grace New Covenant Church on Wednesday, November 24 at 12:00 PM

Celebrating the life of Dorothy Jean Turner, 82, of St. Peters, Missouri, who died on Saturday, October 30, 2021. Dorothy was born on March 27, 1939, in Pemiscot, Missouri to the late Dan Withers and Lindia Clark. Dorothy was preceded in death... View Obituary & Service Information

The family of Dorothy Jean TURNER created this Life Tributes page to make it easy to share your memories.

Celebrating the life of Dorothy Jean Turner, 82, of St. Peters,...