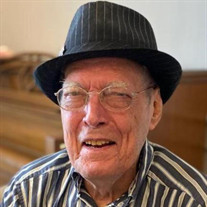 It is with great sadness that we announce the passing of our beloved father and grandfather, Donald Wayne Cline, on December 2, 2020, at the Boulevard Retirement Community in Wentzville, Missouri, where he was surrounded by the love of his three children. While residing at the Boulevard, Don charmed many with his wit, singing, and happy attitude. At Don's request, no service will be held. Donald Wayne Cline was born on November 20,1933 in Fleming, Missouri to George and Gladys Cline. Don served as a Sergeant in the Army and in the army reserves. After serving in the military, Don attended William Jewel College and became a teacher at the high school in Cameron, Missouri. While teaching, he also served as a pastor for several rural churches. In 1968, Don moved with his family to St. Charles, Missouri where he taught Social Studies at Brentwood High School until his retirement. Don Cline's interests included family, fishing, and boating. Mr. Cline spent countless summers and weekends at the Lake of the Ozarks where he also resided upon his retirement. Don's family knew him as a kind and loving father who had a great sense of humor and a wealth of historical knowledge. He was especially fond of Mexican food, pizza, craft beer, Dolly Parton, westerns (especially John Wayne and Clint Eastwood), and nice cars. However, he always had a firm understanding of what was important-living a life with those you love. This gentle, loving, caring, and wonderful man has left a permanent mark etched on our hearts forever and will be deeply missed. Don Cline was preceded in death by his parents, George and Gladys Cline, his brother Warren Eugene Cline, and his wife, Shirley Cline. Donald is survived by his two daughters, Zana Moore and Gina Hamel, his son, Troy Cline, his stepdaughters, Elaine Darter and Natalie Viviano, as well as one daughter-in-law, two son-in-laws, seven grandchildren and two great grandchildren. Donations may be made to the Alzheimer's Association in memory of our special father, Donald Wayne Cline. He will be greatly missed by his family.

It is with great sadness that we announce the passing of our beloved father and grandfather, Donald Wayne Cline, on December 2, 2020, at the Boulevard Retirement Community in Wentzville, Missouri, where he was surrounded by the love of his... View Obituary & Service Information

The family of Donald Wayne CLINE created this Life Tributes page to make it easy to share your memories.

It is with great sadness that we announce the passing of our...