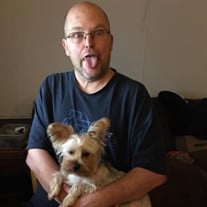 Dennis Ray Jones, of O’Fallon, MO died on February 5, 2020 at the age of 52. He was born June 23, 1967 in Madison, Illinois to the late Donald and JoAnn Jones. The way Dennis Jones' kids, Devin, Michael, Allison, Donovan and Eric, would describe him would be an amazing papa, husband, and father even an amazing father figure to those he did not raise. Denny is a hard worker and always made sure to provide for his family and at times even his friends when they needed it because that's just how big his heart is. He became so patient over the years except when it came to his daughter and dating. Denny was a protector over his family especially when it came to his wife because he was such a selfless man which he has passed onto his sons. He told stories to his children all the time about being the class clown in his school days and man was he a partier with a million friends which he kept up with after all these years he still keeps up with those friends and friends other years he loved to send FB messages at 3 am which some how always landed him in FB jail. Denny started his years with his father, Donald, mother, JoAnn, three brothers Donald, David, Darrin and two sisters, Denessa and Dara, who he loved dearly. He spent most of his days with his best friend and wife of almost 25 years and his three Yorkies Stella, little bit and Pearl. Summertime he always loved being outdoors whether its gardening in the yard for his wife's flowers, floating down the river, fishing, or his feet in the sand of the beach. He loved summertime but he looked forward to the winter because that's when Christmas came. Everyone looked forward to his countdowns till Christmas which his mother, JoAnn, instilled in him. Donald his father always taught him to be tough and strong while his mother gave him her heart. As the years went on it became a little tougher watching his five children grow up and he was introduced to his first grand baby Addison who he helped raise which grew his heart even more for two more grand babies to love, Kora and Braxton. In his wife's words he was a papa and a half. When it really came down to it his wife is his strength, who managed to really show the one of a kind man he was when he supported her during the strongest fight she had to fight. Denny was always honest whether we wanted to hear it or not. He cared so much for his loved ones and most importantly never let without make someone laugh. Denny was loved as a husband, grandpa, father, brother and uncle. As he would want this to end is TRUMP 2020! A celebration of life will be held on Saturday February 22, 2020 from 3-9pm at the Granite City Elks Lodge # 1063, 4801 Maryville Rd., Granite City, IL 62040.

The family of Dennis Ray JONES created this Life Tributes page to make it easy to share your memories.