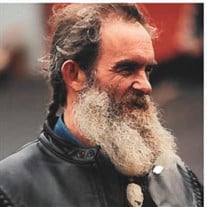 DaWayne Eugene “Butch” Seaton was born on October 7, 1950 in Sioux City, Iowa to Wilburn and Ruth (Litster) Seaton. He passed away at his home in O’Fallon, Missouri on March 22, 2022. He had reached the age of 71 years, 5 months, and 15 days. He moved to Missouri in November of 1984. He met his best friend Nancy in 1985. They were married on August 8, 1990 in Sturgis, South Dakota on its 50th anniversary. They had 37 years together. She survives in their home. He is also survived by a daughter, Echo Belhumeur of Jacksonville, North Carolina, two stepchildren, Richard (Nicole) DePriest of O’Fallon, Missouri, and Alicia Dieckman of Warrenton, Missouri, a sister, Sharon Johnson, six grandchildren, Lane DePriest, Ebony, Jewel, Austin Dieckman, Alexis Eberhardt, and Graysen Dothage. Many nieces, nephews, and wonderful friends will dearly miss him. He is preceded in death by his parents, three sisters, Beverly Summerlin, Donna Seaton, and Darlene Goodier, three brothers, Conrad, Curtis, and Keith Seaton, and many friends before him. Butch was an avid motorcyclist. He owned and operated The Bike Barn in Sioux City, Iowa, then later in Jonesburg and Wright City, MO until 2002. He built hundreds of custom bikes thru the years. Many were published in magazines. Nancy and Butch traveled all over the United States on their bikes. They made wonderful memories together on the bikes. He was a member of the Kirkwood and St. Charles Harley Owners Group. Butch was a one-of-a-kind guy…with a complicated heart. Sometimes he made it hard to love him, but then there were the times he was the most giving and caring person. He definitely left an impression on those he met…good or bad…He left an impression! Butch will be missed by all that knew him. His signature wave was with his left hand and the peace sign. I love you Butch Per Butch’s wishes there will be no service. Those wishing to honor Butch’s memory may make memorial donations in his name to either: Greater St. Louis Honor Flight, by visiting https://gslhonorflight.org/donate/ and selecting Donate today. or: Hartbauer-McBride Memorial Foundation by visiting https://bikershelpingbikers.com/ and selecting Donations.

The family of DaWayne Eugene "Butch" SEATON created this Life Tributes page to make it easy to share your memories.