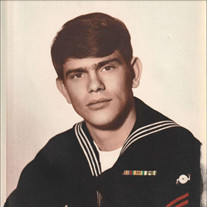 David L. Kathriner, Sr., of Overland, Missouri passed away on September 16, 2021. He went to be with his Lord at the age of 71. David was born in St. Louis, Missouri. He was the beloved child of the late Frances Ruth Kathriner (nee Graham),... View Obituary & Service Information

The family of David Leslie KATHRINER Sr. created this Life Tributes page to make it easy to share your memories.

David L. Kathriner, Sr., of Overland, Missouri passed away on...