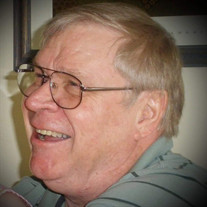 Darwin Carmack Reed, 76, of St. Charles, MO., died Friday, April 15, 2022, at his home in St. Charles, MO. He was born on February 22, 1946, in Chicago Heights, IL. The son of Charles " Bud" and Emma Lee Reed. Darwin was survived by his loving wife Eldonna. He was a loving father to Patricia Scamp, Jim ( Connie ) Usry Jr., Christine ( Derek ) Fletcher, Michael ( Amy ) Reed, Joshua Usry, Ryan ( Helen ) Reed. Brother to Dan Reed. He was proud to be grandfather to 16 grandchildren and 3 great grandchildren. Darwin was preceded in death by his brothers Wayne and Calvin Reed. Darwin served his country proudly for 4 years in the Navy, followed by 2 years in the reserves, where he then got his diploma. He then went on to become an Industrial Maintenance Mechanic, retiring from Precoat Metals. Darwin was an avid fan of movies and music. Some of his favorite movies were Marvel, Monte Python, Star Wars, and Star Trek. He loved Rock and Classical music, especially Enya. Fishing was one of his favorite hobbies besides watching the Cardinals or Chiefs. His most loved sport was any sport that had his kids or grandkids in it. When he would talk about them, he would break into tears with the pride that he had for them. Darwin came into some of our lives as a second husband and dad, but to him all of the kids and grandkids were his and loved them all equally. He cried about their loses and bragged about their successes. To listen to him speak about them, one would think everyone of the kids was a star, genius, an Olympic athlete, or the worlds best at what ever it was they were doing. He was never rich but his family was everything to him. Thank you to all who took time to visit him when he was ill. The time was cherished and will not be forgotten. No matter how much time you spent with him, we both loved those moments knowing how little time he had left. The gifts of food and supplies to make his days easier will not be forgotten. One worry he had when he would be gone, is that he would be forgotten, but he gave us all the love one could give. That love he gave will be with us forever. In lieu of flowers, donations can be made to St. Jude's Children's Hospital. By visiting https://www.stjude.org/ and selecting on donate. “ 2nd star to the right and on till morning. Come find me, I will be waiting.”

The family of Darwin Carmack REED created this Life Tributes page to make it easy to share your memories.