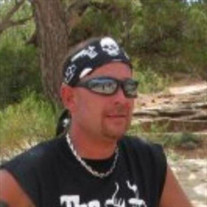 Darin Patrick Hildreth, 58, of O'Fallon, Missouri, died August 28, 2021, at his residence in O' Fallon, Missouri. He was born on February 28, 1963, in St. Louis, Missouri. He is survived by his parents Larry and Sandy (Nee: Compton) Hildreth, loving wife and long-time caregiver Dawn Michelle (Nee: Brown) Hildreth, his five children, Jason Hildreth, Jamie (Josh) Runion, Michael Hildreth, Timothy Hildreth, and Luke Hildreth. He is also survived by his two siblings, brother Donald (Michele) Hildreth, sister Trisha Hildreth of Lake St. Louis, Mo, grandchildren Allani Hildreth, Katelyn Hildreth, Hayden Runion, Audrey Hildreth, Olivia Runion, Declan Hildreth, and aunts Patricia (Cecil) Hampton, and Carol (Mark) Hollett. Darin loved his family beyond measure. He is preceded in death by his grandparents Wendell E. and Lillian M. (Nee: Toland) Compton, and three uncles; Bill Compton, Ronald Compton, and Arthur Compton. Darin never gave up at anything and always sought to better his life for his wife and children. He loved “projects” that were a little too big and took on any task given to him with every ounce of energy he had. He was creative, a fantastic craftsman, avid fan the Green Bay Packers, an extreme perfectionist, and spent most of his time when his oldest children were young being their coach at basketball and softball. He was always their biggest fan. He was a dedicated, proud, and supportive husband and father to his wife and all five children, and they know that they were very much loved by him. Later in life Darin became active with riding his Harley in which he entered and won numerous shows. He and his “Godfather” bike were pictured in an issue of Baggers Magazine in 2008 and was also featured in Matrix Calendar for the month of February in 2009. His boisterous laughter filled a room, his incredible sense of humor was unwavering, and he would give his last penny to anyone who needed it. He was always willing to help others in need, even when he was most in need. He always had a good story to tell, and he usually “knew a guy” if you ever needed anything. Darin fought to the very end, and never, ever gave up. Darin will be greatly and deeply missed by all. Darin's family will be having a memorial visitation on Friday, September 17, 2021, 4pm to 6pm at Alternative Funeral & Cremation Services 2115 Parkway Dr, St. Peters, MO 63376. Memorials can be made to the family via GoFundMe at https://gofund.me/b0175740

Darin Patrick Hildreth, 58, of O'Fallon, Missouri, died August 28, 2021, at his residence in O' Fallon, Missouri. He was born on February 28, 1963, in St. Louis, Missouri. He is survived by his parents Larry and Sandy (Nee: Compton) Hildreth,... View Obituary & Service Information

The family of Darin Patrick HILDRETH created this Life Tributes page to make it easy to share your memories.