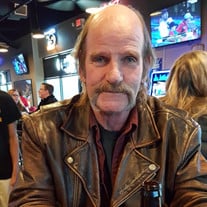 Dale Brent Weeks, born March 30, 1952 in Kansas City, Missouri, died July 05, 2020 in Rolla, Missouri after a short but fierce battle with throat cancer. Dale was born to Robert (Bob) and Marilyn Weeks. Both of the preceded him in passing as did his younger sister, Mary Ellen Weeks. Dale is survived by his brother Terry Lee Weeks, who lives in Cedar Springs, Michigan with his wife, Diane. Dale is also survived by his aunt Letty Beem and her children, Dale's cousins, John Beem, Heather Cook, Scott Beem and Grant Beem. Dale is also survived by his many, many good friends and loving acquaintances who have lost a dear friend and treasured soul. Dale was a friend to all, and was always willing to lend a hand to help out anyone who needed it. He never had childred, but there were many children who were special to Dale, especially Michelle's (aka Coffee) kids, Jennifer and Dylane. When Dylan graduated from High School in 2009, Dale was especially proud, as if Dylan was his own. Dale could tailor a suit, fix a motorcycle, rewire your house or work on a car at any time, anywhere. He was a master of many skills, mostly self-taught, although his mom, Marilyn taught him his way around a sewing machine, a skill he used often, even creating himself a blue-jean two piece suit. The last few months of Dale's life were not the best, but he handled eviction, homelessness and cancer with the same aplomb that he met all of his life with, and he had a smile on his face most of the time, despite facing adversity that would bring others to their knees. When Dale became ill, he knew the prognosis was not good, but he was determined to fight it to the very end and he did. Despite being confined to a nursing care facility and unable to have visitors due to the corona virus pandemic, he made the most of his time at the Rolla Rehabilitation and Nursing Care facility. he passed peacefully under the full moon on July 5th in the care of hospice, with the love of everyone surrounding him. Dale will be sorely missed by everyone who knew him. There will be a memorial gathering at Alternative Funeral & Cremation Services on Saturday, August 08, 2020 from 9:00 AM – 11:00 AM with a service at 11:00 AM.

Dale Brent Weeks, born March 30, 1952 in Kansas City, Missouri, died July 05, 2020 in Rolla, Missouri after a short but fierce battle with throat cancer. Dale was born to Robert (Bob) and Marilyn Weeks. Both of the preceded him in passing as... View Obituary & Service Information

The family of Dale Brent WEEKS created this Life Tributes page to make it easy to share your memories.