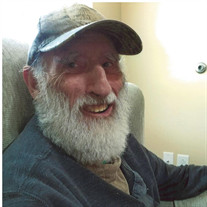 Charles John Williams entered heaven on July 7, 2020. Charlie is best known for his walk with God. He deeply loved his family and loved sharing his faith. God gave him a love for discipling men shortly after he became a Christian at the age of 29. He spent his life caring for his family and building into men's lives sharing how they could have a personal walk with God. We won't know this side of heaven all the peoples' lives he touched and is still impacting through his book 'Charlie's Letter's'. He couldn't walk on water but he walked close enough to the one who could that God walked thru him. He joined the army after high school. Married Tammy before leaving the Army. Began his career in sales. He worked for Todd Uniform for 15 years. Leaving Todd to go on staff with CBMC in 1983. He founded Ministry to Men in 2000, a men's ministry which is an outgrowth of his life, building into men the love of God in their home, workplace, church and community. Charlie led a full life, he loved to fish, hunt and play fastpitch softball and was a great third basemen. Favorite vacation spots were Branson and Florida. He loved to collect shells. He served on the Jennings School Board, taught Sunday School, coached little league baseball, loved to sing the hymns, enjoyed family vacations, and loved his wife unconditionally. He gave up his life as Christ did for the church and taught others how to do the same. He was diagnosed with Alzheimers in 2011. He continued to lead M2M until 2014. Alzheimer's is a cruel disease but God continued to use him in so many lives until the day God called him home. Charlie was born on January 10, 1939 to George and Nancy (LaRocco) Williams. He is survived by his wife, Tamara (Mahlandt) Williams, four sons, Charles John Jr, Jeffrey Scot, Stephen Richard, James Andrew, four daughter in laws, twelve grandchildren, 17 great grandchildren, two sisters, GeorgeAnn Treat, Jackie Overkamp, sister in law Sharon Buenger (husband Mel) and many neices and nephews. The family request any gift be given to CBMC, 5746 Marlin Rd # 602, Chattanooga, TN 37411 or Ministry to Men, http://www.ministrytomen.net/. There will be a graveside service with Military Honors on Tuesday, July 21, 2020 at 10:30 AM at Jefferson Barracks National Cemetery.

Charles John Williams entered heaven on July 7, 2020. Charlie is best known for his walk with God. He deeply loved his family and loved sharing his faith. God gave him a love for discipling men shortly after he became a Christian at the age... View Obituary & Service Information

The family of Charles John WILLIAMS created this Life Tributes page to make it easy to share your memories.