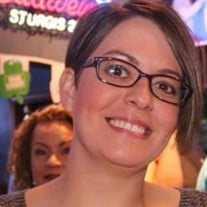 Brandy Brooks, of St. Charles, Mo. Passed away on 12/09/2021 at the age of 44, under the care of her family and BJC Home Care at her parent’s home in St. Charles, MO. Brandy was a fighter! She was competitive in everything she did, and after being diagnosed with colon cancer in 2020, we were able to see how strong Brandy really was. All the complications, and hurdles thrown at her didn’t matter. She was full of life and energy. Always the life of the party and a smile that could buckle your knees. Her mental strength and ability to keep pushing forward was so rewarding, yet so surreal that you would question “how does she do it?” While fighting cancer during all the time, she was still working during the day for Georgia Banking Company doing what she loved. Brandy was a mother, daughter, sister, aunt, girlfriend, and friend to many people. Brandy cared for everyone and has left a lasting impact on many lives. The one certain thing is, not all super-hero’s wear capes, as Brandy preferred her granny shawls instead. Brandy will be dearly missed by so many, she was truly one of a kind. Brandy was born to John Brooks and Cindy Drevs on September 8, 1977, in Newark, Ohio. After moving to Missouri, she graduated from Francis Howell North High School in 1995. She had many interests in life, but none more than being a mother to her son Riley. She always said, he was her greatest achievement in life and what she is most proud of. Brandy was preceded in death by her father: John Brooks She was survived by: Son, Devon (Riley) Harris II; Mother, Cindy Drevs; Stepfather, Mike Drevs; her two sisters, Micaela Drevs and Mackenzie Brooks; and her brother, Tyler Brooks. She is also survived by: Significant Other Steven Newton & Steven’s daughter, Harper Newton; and family Patrick, Vickie, Kevin, Brian, Shannon Newton; and nephews, Tyson Billups, Kobe Billups, Brody Newton There will be a Celebration of Life to remember Brandy on Friday January 7th, 2022, at “The Vineyards Clubhouse” 756 Napa Lane. St. Charles MO, 63304, starting at 6:00 PM.

Brandy Brooks, of St. Charles, Mo. Passed away on 12/09/2021 at the age of 44, under the care of her family and BJC Home Care at her parent&#8217;s home in St. Charles, MO. Brandy was a fighter! She was competitive in everything she did, and... View Obituary & Service Information

The family of Brandy Jo BROOKS created this Life Tributes page to make it easy to share your memories.