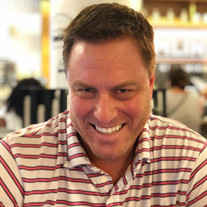 Bradley Allen Calderon, age 45, passed away Tuesday November 24, 2020. Brad was born on August 15, 1975 in Seattle Washington. He was the beloved husband of Adrianne Calderon of Chesterfield Missouri, Father to three beautiful children Avery (16), Brady (14), and Blake (8), Son of Debby and Ray Calderon of Chesterfield, MO, and twin brother of Shawn Calderon. Brad was a graduate of Parkway West high school. He was a member of the Parkway West football team and the state championship swimming and diving team. He received his Bachelor of Science in Business at Southwest Missouri State University where he met the love of his life, his wife Adrianne. He was a member of Sigma Chi fraternity. He had a successful career in technology sales with IBM, Forcepoint and Blackberry. He received much fulfillment from his relationships with colleagues. Brad’s favorite activity was coaching and cheering for his children. Nothing could stand in his way when it came to supporting Avery, Brady, and Blake. Brad loved golfing, snow skiing, football, and he was an excellent cook. He had a zest for life with unlimited energy. He was always the life of the party. And he was always there for anyone who needed a helping hand. Brad always had a smile on his face. He, without exception, cherished his family. Especially his parents, brother, wife, children, and in-laws. Brad was like a brother to his extended family. Brad was loved beyond belief by his friends, coworkers and relatives and will be deeply missed by all. Most of all, Brad had eternal love for his family which was the core root of his life. Brad will always be with all of us in spirit and FOREVER IN OUR HEARTS.

The family of Bradley Allen CALDERON created this Life Tributes page to make it easy to share your memories.