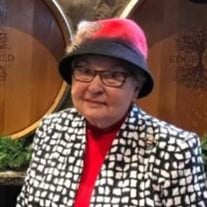 Lee (Renfrow/Vaughan), Beatrice Susan (Bea)95, lover of crossword puzzles, strong coffee, Scarlette O’Hara, dark chocolate and Jeopardy! passed away peacefully on May 6, 2020, in her home in St. Peters, MO. Born on the banks of a branch of the Little Tavern Creek in Maries County, Missouri in 1925, the daughter of John Henry Renfrow and Louella Belle (Lawson) Renfrow, the first 25 years of her life were spent without electricity, running water or indoor plumbing; the only heat came from an old wood stove and the quilts her mother and older sisters crafted by hand. In 1934, her father succumbed to pneumonia, leaving her mother to either provide for her six children or give them up to serve as indentured servants to families that would feed them in return for the labor they would provide. Interesting note – Penicillin was released right after his death. Belle chose to keep her family together. Bea told her kids this story: before sunrise every morning, Belle/mom would pin up her long, dark hair, don a pair of old bib-overalls, and go out and work in the fields (until sunset). This was not an easy life - they ate what they grew themselves and butchered the occasional cow or pig they raised or for which they bartered. There was no money, just sweat … sweat equity - hard work. At the age of 17, Bea passed the teacher’s exam and went to teach school in a one room schoolhouse. She rode 17 miles back and forth on an old horse named Dan, and recalled that in the winters she would have to stop in the snow many times along the way to dig the snow out of his hoofs, wind howling around her ears while she worried about freezing to death or getting frost-bite. She married our Dad, Walter Floyd Vaughan, in 1944 while he was home on a 3 day leave from the Navy (WWII). Her wedding attire was a simple white/green gingham dress. Years later she would read the book Gone with the Wind and remember that dress as she read about Scarlette O’Hara attending a barbeque wearing a white/green dress with flowers on it - and wearing a big green hat. Walter preceded her in death in 1971. Bea married Garvin Alton Lee five years later; they had adventures – road trips across the Southwest, trips to Branson and Las Vegas, but her very favorite memories (and ours) were of the weekends with her beloved Grandkids, as they were growing up, at their farm in Maries County (near Iberia MO), and located right off of Hoot Owl Holler Road. Priceless memories for all of us… Garvin also preceded her in death in 2007. The farm is still in the family and the Grandkids still love and visit it, often. Bea’s spirit is carried on by her four children: Michael John Vaughan (Janis), Patrick George Vaughan (Carol), Susan Jean Helm (John) and Jane Ellen Lynch, (Curt). Five grandchildren: Patrick George Vaughan, Jr., (Anne-Marie), Jeanne Suzanne Helm, Eric Wade Vaughan (Michelle), & John Adam Helm, and step-granddaughter Samantha (Sammie) Newland. Two great-grandchildren: Olivia Bea Vaughan and Ivy James Vaughan, and two step-great-granddaughters, Selah Newland and Bria Newland. And, of course, one delightful Shih Tzu, Sadie. Her legacy includes so many beautiful quilts she made for her children and grandchildren without ever a thought of making one for herself. She spent many joyful hours picking out colors and patterns and laying out different combinations until it was “just right” and she could get to cutting, sewing and creating. An amazing cook, her pies with their flaky crusts and homemade fillings are legendary across mid-Missouri. She became the caregiver to her husband, Garvin, who was blind for nine years, with no complaint. In fact, she never complained about anything – her favorite saying was “it is what it is.” She was loving - devoted to her family - always putting them before herself. She was strong, independent and enduring. She was familiar to a lot of St. Louis restauranteurs as “The Hat Lady” – as she sported one of her 136 hats on her weekly-Wednesday lunches. A private Memorial Service/internment of her ashes will be held at a later date at Dick Lawson Cemetery, Miller County, Missouri. Bea’s monument is already in place at the Dick Lawson Cemetery in the Vaughan/Renfrow section. Dick Lawson was Bea’s grandfather, and he dedicated a portion of his farm as a cemetery for Miller County residents to use at no cost. In conjunction with her favorite book, characters and movie, her monument is inscribed “Gone With the Wind.”

Lee (Renfrow/Vaughan), Beatrice Susan (Bea)95, lover of crossword puzzles, strong coffee, Scarlette O&#8217;Hara, dark chocolate and Jeopardy! passed away peacefully on May 6, 2020, in her home in St. Peters, MO. Born on the banks of a branch... View Obituary & Service Information

The family of Beatrice Susan LEE created this Life Tributes page to make it easy to share your memories.